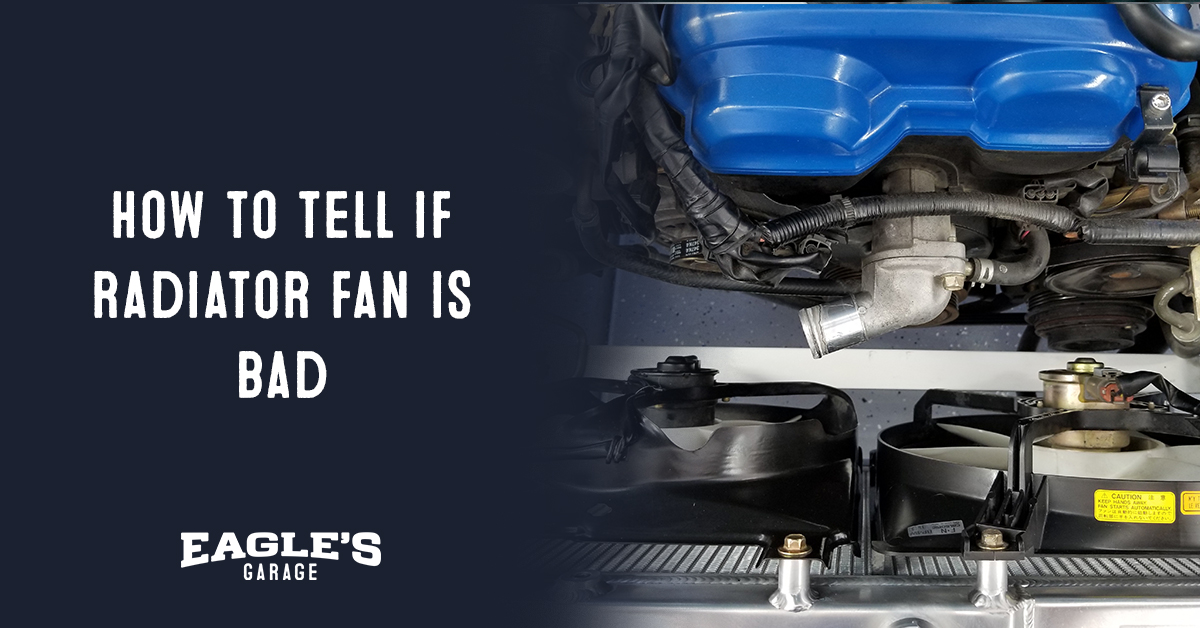 If you live in a warmer climate and own a car, a radiator is one of the few things standing between a smooth driving experience and a blown engine head or even worse on flames. A hotter running engine carries the risk of your engine overheating, which can lead to serious engine damage.

Your car’s cooling system contains the water pump, thermostat, radiator fan(s), coolant hoses and other components that keep your engine from overheating when driving in hot weather. In reality, there are several ways you can determine if your radiator fan is bad or broken and we will be covering all of those in this article.

What Does the Radiator Fan Assembly Do in Your Car?

A radiator is a heat exchanger used in cars and trucks. It works by pumping a fluid that can be water or anti-freeze, through the radiator tubes in to the air that is flowing over it. Some of the heat from the engine gets transferred to this fluid and exits via radiator fluid to be carried away with the air.

The radiator fan blows outside air through the radiator tubes, thus speeding up this process by increasing the temperature gradient between the hot engine and cooler ambient air. This fan is placed in front of the radiator to force air through it, so naturally, it’s called a “radiator fan”. The fan also cools the engine by pulling in cooler outside air that is then fed into the engine compartment. If this process stops, your car overheats.

The radiator fan is one the simplest mechanical parts in your car and it’s large size makes it easier to spot and recognize as even nonprofessionals are familiar as to what a “fan” looks like.

In the vast majority of cars, it’s a belt-driven assembly that is attached to the water pump. Your engine may have one or more radiator fans. Two-engine systems typically use one fan for each side of the engine block, while single fan systems transfer air through both sides of the engine compartment to be cooled by a single large radiator fan assembly then vented outside again.

The location should be obvious as it will be right behind your car’s grille and/or front bumper assembly. If not seen in those locations, search for it in the car’s front and look to the sides as well.

Symptoms of a Bad or Failing Cooling/Radiator Fan Motor

The following are some telltale signs that your radiator fan assembly may be having issues.

1. Cooling Fans Do Not Come On

Simple enough as stated, but how to tell if your radiator fan does not turn on? This can be done usually by either taking a look around the engine compartment and seeing if the fan blades are turning (most car manufacturers provide airflow to the radiator fan via “fans” that push air towards the radiator, not actual blades) or by opening up your hood and looking at either the one or two fans directly.

In some cases, if the vehicle temperature is too low and the engine is not at its normal operating temperature, then your fans may not start. This usually occurs on vehicles with electric cooling fan systems as opposed to those that operate off of a belt.

For this you can try turning on your car’s A/C system as this may engage the radiator fans. If the cooling fans do not activate, you need to replace them or perhaps consider getting your cars temperature sensor replaced.

Also Read: How to Make Radiator Fan Turn On

The most common sign of a bad radiator fan is the car overheating during driving, especially on hot days. If your engine temperature excessively rises and doesn’t seem to drop (or drops only slightly) then chances are that it’s time for a replacement radiator fan or at least to investigate further.

Perhaps a bit more technical, but a good way to determine if your radiator fan is bad is to check if there are no blown fuses. This can indicate that your fans are not turning on at all. To check the fuse box, you must first open up your hood to expose it.

You can locate this using a map of your car’s electrical system and locating the fuse box itself for your radiator fans, but if you don’t have this manual or simply find them hard to find, look around the engine compartment for any yellow fuses that are blown. In most cases, if the fuse is blown it will look like the plastic end has popped out or is missing or even burnt and melted.

When the radiator fan is failing or stops completely, the air conditioning inside the car will suffer as a result. The cooling fan for your radiator helps to produce cold air and if it doesn’t work as efficiently as it should, the A/C system may not perform at maximum potential so you might experience less cooling or simply notice that your vents are blowing warm air instead of cool.

The fan pulls air from outside the passenger compartment through the A/C condenser and expels it out of vents inside your car. If this is not working, then it may be time to check on your radiator fan.

Also Read: Why Does My Car Overheats When AC Is On

Noises coming from the radiator fan itself are usually indicative of a worn-out fan motor. While fans are supposed to be quite smooth when they operate, old or worn-out ones can produce an abnormal whirring noise or grinding sound. This is best heard in the front of your car at its lowest points where you can stand and look directly at it (or kneel if necessary).

If you hear unusual noises like these, chances are that your radiator fan needs replacing, either because it’s old or broke down.

What Causes the Radiator Fan Assembly to Fail?

There are a multitude of reasons why radiator fans will fail to operate, but the single most common reason is that they are simply old or have been damaged with time. They don’t run forever and eventually; something will go wrong after a certain amount of usage and wear and tear.

Some of the most common ways for your radiator cooling fan to become faulty include:

Lack of use: If you leave the car unused for weeks at a time, this might cause the fan to stop rotating as it may not work on its own power due to lack of juice from the battery.

Electric issues: A lot of electric fans require grounding which enables them to operate properly so if one is loose or corroded then it may fail including causing other safety problems such as ground faults, resulting in overheating of your car engine.

Damage: If your cooling fan has been damaged somehow, perhaps through an accident or collision with another car, it may not rotate correctly and this could cause overheating.

The average cost to replace a radiator cooling fan ranges from $300 to $600 and up. The lower price is normally just to replace the fan motor itself, while higher prices can also include repair or replacement of other parts in your car’s cooling system.

This also may or may not factor in the cost of labor and any additional parts that might be needed to complete the job as this usually varies depending on the type of car you drive, the services offered by local mechanics and even where you live.

If your car’s radiator cooling fan is broken or not working, you can often tell by certain signs and symptoms such as:

Sometimes the fan may not run at all but you don’t necessarily know it right away because there are other things that can cause your car to overheat or experience less than optimal temperatures like a clogged radiator, low coolant level, etc.

If you’re still unsure if your radiator is operating properly and need assistance in this matter, make an appointment with your trusted mechanic to diagnose the problem and replace or repair any faulty components as necessary.