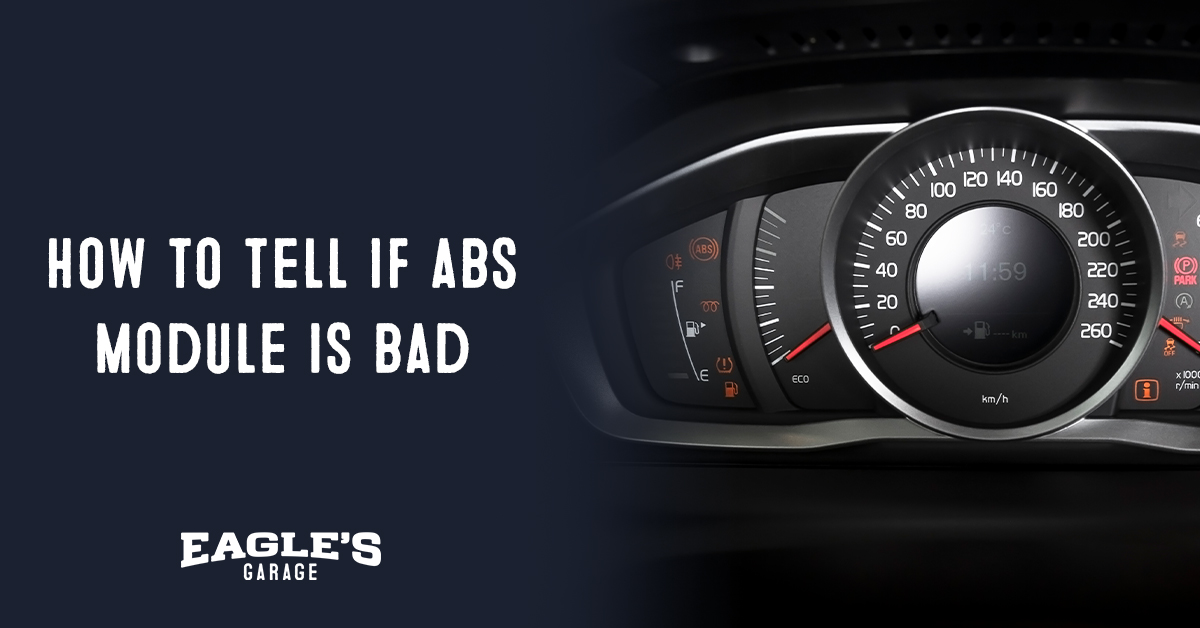 One of the most dangerous situations one might find themselves in with their car is an ABS malfunction while driving on a highway. Because ABS is designed to prevent your car from locking up while driving on a smooth, hard surface, you might have no idea whether or not the system is working properly.

If you are traveling at a fast speed and the ABS malfunctions it could cause you to lose control of your car. If you are coming up to an intersection or lane change and the brakes feel weak, spongy, stiff, require holding the pedal down to the floor, or just don’t work at all this could be an ABS malfunction but worry not, this isn’t the only way to identify this serious risk.

There are many symptoms that an ABS module failure may result in and identifying them may save you from ending up in the scenario described above. For this reason, it is important that you know the top five ways to tell if your ABS system is malfunctioning and that is exactly what we will be covering in this article which covers how to tell if the ABS module is bad.

What is Anti-Lock Braking System (ABS)

Before go start talking about the signs it is important to understand how an ABS system works.

ABS works by monitoring wheel rotation and vehicle speed to determine when the wheels are about to lock up. The main component of an ABS system is the pump motor, which pumps hydraulic fluid into one of the brake calipers via a hose called the pressure line whenever you press down on your car’s brake pedal; this hydraulic fluid then flows into the brake caliper where it forces out friction material that rubs against your pads, slowing down or stopping your wheel from turning while braking. If for some reason there is too much pressure in the brake caliper (a result of one or more tires locking) sensors force either one or all four valves inside whichever wheel has locked to open up and vent out excess air pressure thus allowing the wheel to turn and continue braking.

The following are the electrical components of an ABS system that are essential for the system to function properly:

As its name implies, the ABS Sensor monitors wheel rotation speed and vehicle speed while determining when to brake or release brakes under certain circumstances. The sensor then sends this information to the control unit, which in turn relays commands back through wires established by sensors installed on your brake pedal assembly.

The ABS Module is the main device that sends and receives electronic information between your car’s body control module (BCM) and ABS sensors. For example, if one or more of the ABS sensors detects that a wheel has locked up; The ABS Module then sends a signal to the pump motor to let it apply brake pressure for as long as needed, or until your car’s main body control module tells the ABS Module to stop so that it can send other signals for the brakes at that wheel to release.

ABS Modules are usually built into each brake cylinder and consist of a computer which runs on feedback from sensors installed on your car’s brake pedal assembly, brake lines, valves inside each wheel, and wheel speed sensors that send information through wires back to ABS Module.

The ABS Modulator is a part of the ABS system that controls hydraulic fluid flow to each brake caliper. It does this by opening and closing valves inside the brake caliper, which forces hydraulic fluid into and out of the caliper depending on whether your car’s main body control module has told it to apply or release pressure for any given wheel.

Signs of a Faulty ABS Module

The following are telltale signs that your ABS module may have failed or is malfunctioning:

If your car is equipped with a light that illuminates every time the ABS system activates or deactivates it could be an indication that there is something seriously wrong with your car’s ABS system as this means one or more of the sensors have failed. If you know how many lights are on when the ABS kicks in or out then checking those amounts can be a method for finding issues with your vehicle’s ABS system.

In addition to problems with the valves being blocked, plugged, damaged, corroded, etc. a faulty sensor can also present itself as a malfunctioning ABS warning light so don’t forget about these either because they play a hand in bringing about ABS failure.

The Brakes Lock Up

If you’re unable to stop your car as it should be able to, there’s a good chance that the problem is with your ABS module. This can present itself as minor inability to slow down or even as complete lock up of all four wheels.

It’s important that you take note of how long it takes for brakes to start working again and make sure that little time passes between when they begin locking and become functional once more. If the time elapses too quickly then it may also mean that your car needs brake pads or rotors immediately.

It’s not uncommon to find yourself unable to brake in an ABS equipped car when they begin failing. It usually shows up as the brake pedal feeling “spongy” so much so that it feels like no pressure is being applied at all. Again, this can be a symptom of faulty sensors or you may have some other problem with your brakes which would require immediate attention.

When your car’s ABS is faulty, you may feel as if it takes more effort to brake. This is especially true for older vehicle models with overly worn-out components. It can also feel like the pedal becomes hard or even partially locked up while driving on roads that are wet or have a lot of snow or ice.

If your car isn’t slowing down at the first time you step on the brake then this could be an indicator that its ABS system has problems. If it takes several attempts before braking mechanics seem normal again, then there is definitely something wrong.

Your car’s speedometer can fail because of an ABS problem. This is especially true with older models that have mechanical speedometers with needles that are driven by signals sent from the ABS module.

If your needle keeps jumping around and stays in place too long even with quick acceleration and deceleration, then this could be a result of your ABS system malfunctioning or not functioning properly. If this is the case, then you should have your car diagnosed by a professional as soon as possible.

The engine compartment of most vehicles contains the ABS control module and it’s typically mounted somewhere near the brake fluid reservoir, if it isn’t buried within it. The location varies from car to car, depending on make and model but they all try to keep them close enough for easy access and replacement if and when the need ever arises.

ABS control module replacement for most cars is typically at least $250, but it can vary between models. You’ll need to check with your local repair shop or dealership to get a better idea of the exact cost of repairs on your vehicle because this varies greatly.

The ABS system is a complex system of valves, sensors and pumps designed to help prevent your car from skidding or locking up. In some instances, these ABS issues can be resolved by replacing the control module that manages all of the functions of this system. If you’re experiencing any problems with your ABS light turning on, then getting it diagnosed as soon as possible will save time and money in the long run.