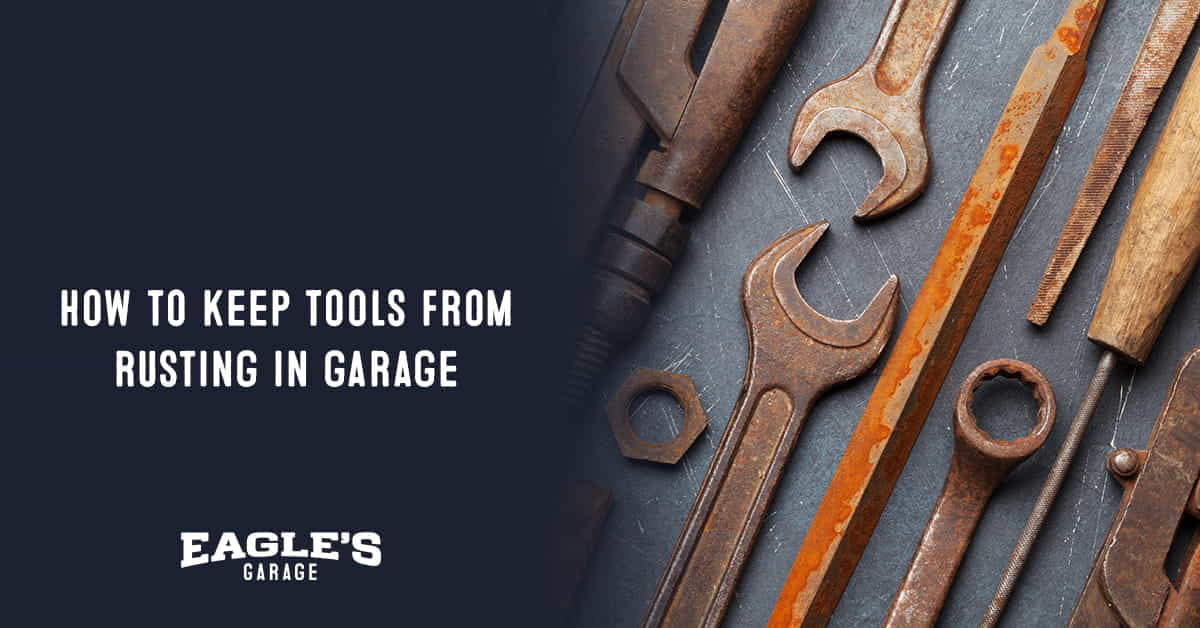 They’re called grease monkeys, not rust monkeys. Rusting is a leading cause of the death of your wallets and having to replace tools. A lot of them are passed down through generations of homeowners. To have a gift for your next generation, you’ll need to know the proper upkeep for your tools. These tips will help remove rust and keep tools from rusting in your garage.

Rust is formed when metals react to water and oxygen. It’s a scientific reaction that most untreated metals go through. Rust can affect tools differently. Some tools can be rendered useless and others just damaged. You have to be aware of what your tools are and how to care for them.

How Different Type of Tools Rust

Iron and steel are the easiest materials to rust. Quickly after water and oxygen come in contact, oxidation starts almost immediately. Saltwater will not rust your tools but if your tools are already rusted, it will speed up the process. Acid rain also causes rust but that’s not as common of an issue.

Some tools such as aluminum and copper do not rust by traditional means. Aluminum is a special case as it has a protective layer that prevents it from rusting. Copper does not rust by water but can be tarnished by the environment. Saltwater and heat can also cause copper to corrode at a more rapid rate.

How to Prevent Tools From Rusting in Garage

There are multiple ways to prevent your tools from rusting and corroding. Most ways involve the storage of the tools but there is a spray you can use. The anti-corrosive spray cleaner can both help prevent rust and clean off pre-existing corrosion. Use the spray to coat the tools and let them dry. It will last several months depending on how much you use the tool.

Preventing damage is one of the simpler ways to preserve your tools. When you protect your tools, they will maintain their protective outer layer longer. Nobody is saying wrap up your tools and not use them but laying them carefully as to stop them from falling. Small chips and scratches create bigger openings for rust to settle in. Handling your tools with care is an amazing form of preservation.

It shouldn’t be too much of an issue inside a garage but keep your tools from getting wet. Store your tools on a table or in an airtight container in case of flooding. If your tools are covered, it’s great to protect them from leaks in the roofs. Sturdy containers are also an extra protective layer from the environment. Moisture, drastic temperature changes, and random gusts of wind can be greatly diminished in a protective case.

Also Read: How to Store Extension Ladder in Garage

You can’t stop all your tools from rusting but when your tools rust you can remove the rust. Aside from the spray that was mentioned earlier, you can use lemon juice to remove rust. Submerge your rusty tool in lemon juice. After submerging, cover in coarse salt and wipe clean. This will remove most (if not all) of the rust. If not happy with the results, let soak in lemon juice and salt longer.

Baking soda is another great way to remove rust. Pour baking soda and water into a bowl until a paste is formed. Use that paste to cover your tools and let sit for at least 3 hours. To remove the paste, run clean water as you scrub with a steel wool brush (steel wool balls are an acceptable substitute). Repeat the process as necessary until desired results.

A vinegar bath is a smoother way to remove rust. Combine white vinegar and equal parts of water. Just let the tools soak in the white vinegar mixture. The reaction can take anywhere from one to three days. The chemical reaction will make the rust removable with a wipe of a clean cloth or towel. Properly dry the tools and store them back in the garage.

If you think this article is too long to read, just boil your tools in coke and cover them in cooking oil to preserve them. That’s an old back alleyway for it. It’s best if you just follow the article. For more tips and information, check out our website today.

If you like what you are reading, please consider checking out the articles below: