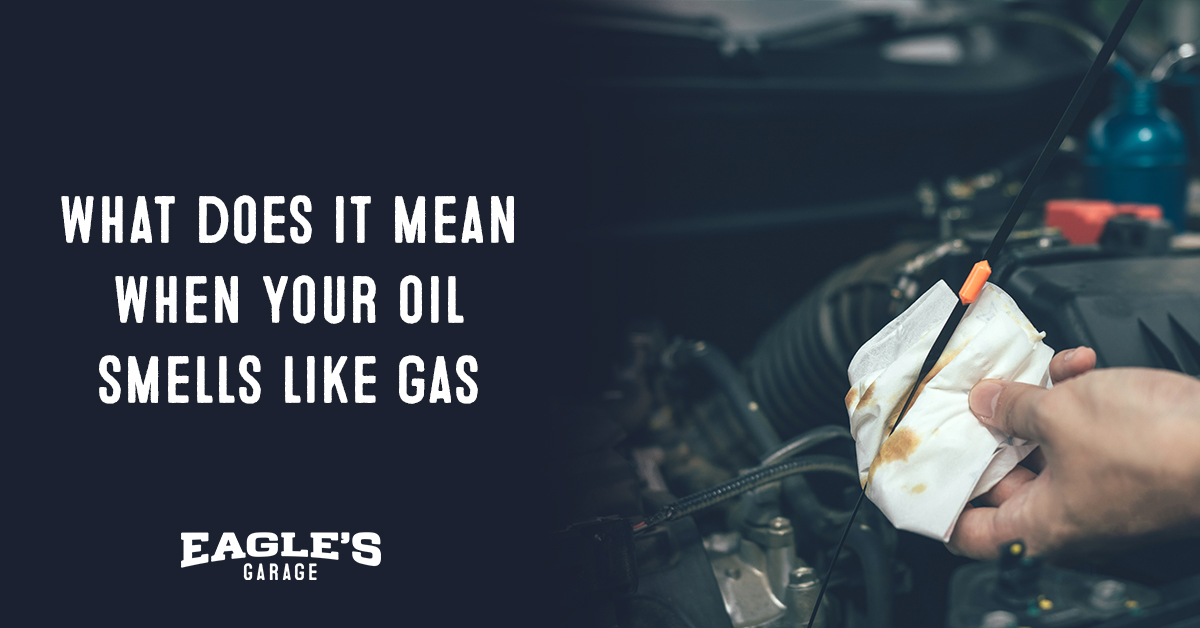 Oil and gas have their own very specific purposes for a car. Oil lubricates and cools the engine, while gas is what sets off explosions inside your combustion chamber to make the engine run.

However, when your oil starts smelling like gas, it can be very alarming because it means something has gone wrong with either system. Generally speaking, and the most obvious point being of course, the two should not mix and if continued to run in such a state, something in the engine will surely give in. This is a very common issue in old cars, but also newer models.

In most modern automobiles, the gas tank is separate from the oil tank, with its hoses circling the engine while oil is kept in a different location entirely. Think of oil as the blood that moves around the body and gas as the food that provides energy to make the engine work.

There are many reasons why oil smells like gas. One of which is probably an old car with worn-out seals, where the two fluids are mixing; either due to a leak or because there is not enough sealing on either end of both systems.

Let’s take a closer look at what could be going on when your oil smells like gasoline.

How Does Gas Get Mixed with Oil?

So why would that happen? Well for starters you need to know the basics of how your oil and gas systems work. The gas tank is located separately from the oil tank in most modern cars and its lines run around the engine while oil is found in a separate tank under the engine and in the central areas of it too.

However, in most cars, the two fluids are at a very close proximity with no protection in between them inside the engine and if they mix, it can have some very adverse effects on your car referring specifically to its engine.

The main reason why oil and gas shouldn’t mix is that gas with its highly combustible content mixed in with your oil can damage or even destroy the engine. The metal parts of the engine operate by small explosions moving them and if a drop of gas is present in one of those explosions, it will be able to travel quickly through the system.

The following are the 9 most common causes of why your oil smells like gas:

1.) Driving in a Shorter Distances:

Continuous small distance driving does not allow the temperature in the engine to reach a level of thermostability. This is because when you are driving short distances, the engine does not have enough time to heat up and burn off impurities that may be in your oil.

2.) The air-fuel mixture is way too rich:

If the mixture is too rich, it means that there is more gas in the air-fuel mixture than normal. This happens when either the air or fuel intake is faulty.

Piston rings are there to make sure that fuel is not able to pass between the combustion chamber and crankcase. If piston rings are faulty, they will start leaking gas into the crankcase oil.

If the fuel injector is faulty, it will start leaking gas into the crankcase which will in turn mix with your oil. This is because the raw gas comes from the tank and gets pulled through a filter before it reaches the injectors.

When the engine misfires, it means that there is unburned fuel in the combustion chamber and this gas ends up in your oil.

Inconsistent gas flow from the carburetor or improper carburetor settings can lead to leaks in your gas system.

7.) Adding Gas Instead of Oil:

Obviously, you have to add oil and not gas to your car, but you might have done that intentionally on some occasion or if your oil was already mixed with fuel.

When you have not changed your oil in a while, your engine generates extra sludge that mixes with the oil in the crankcase. This sludge consists of gas, lead and other harmful chemicals that can be very corrosive when mixed with oil.

Also Read: When Is the Best Time to Check Your Oil

What Are the Symptoms of Oil and Gas Mixture?

Noticeably you will start to see your car having the following symptoms:

A strong smell of gas is usually the first sign that you are leaking fuel in your crankcase. If this smell is present, it’s likely that you are already mixing oil with gas.

If you spot white smoke coming out of your exhaust pipe, then there is a very high chance that you are mixing oil and gas. White smoke usually means unburnt fuel in the engine.

When you take the dipstick out of your engine to measure your oil, it should smell very similar to when you first open a brand-new bottle of oil. When the gas mixes with the oil, it starts smelling more like gas.

Leaking fuel into the oil pan will make it rise to a higher level. If you find your oil level is too high, then you are probably mixing gas with your oil.

Common Consequences if Gas Getting into Oil

You will begin to experience the following problems if gas is leaking into your oil:

Oil with gas in it will become less viscous and this can lead to serious engine damage if left untreated.

The rate at which your engine will wear and tear is much faster if you are mixing oil with gas. If this continues, it can lead to piston ring failure or even a breakdown of the engine.

Gas in oil does not mix well with the cooling systems in your car. The gas will lower the ability for cool air to flow through your engine and can lead to serious overheating of your engine.

4.) Enormous Losses in The Fuel Economy:

This of course is very important for most people. If you are mixing gas with your oil, it means that there is a huge leak in the carburetor or fuel line somewhere on your car which can cause massive losses in fuel economy.

How to Prevent Gas Getting into Oil

There are several ways to prevent gas from getting into your oil. The following are the most common ones:

You should keep up with your oil change intervals. This will give you enough time to find out if some of the gaskets on your car are leaking or some seals around the piston rings are failing. If you don’t do this maintenance, it will be too late once gas has already started mixing with your oil.

Expensive piston rings can cost a few hundred dollars, but they are usually worth it. You should change your piston rings after you have driven the car for 100000 km or 60 months. Make sure that you keep up with this maintenance to avoid mixing oil and gas in your engine.

This goes without saying, driving longer distances will allow your car to use up the gas in the crankcase more quickly. This helps eliminate many of the problems caused by mixing oil and gas together.

Sometimes canisters have remnants of gas and other fuel products mixed in with the oil. This is common in cheap varieties of engine oils, which you should stay away from.

To sum it all up, you should now know what are the symptoms of mixing oil and gas are and how to avoid future problems by keeping up with your routine maintenance.

If you think that there is a chance that your car may have mixed oil and gas, then bring it in to a mechanic immediately to prevent further damage from happening. If your engine becomes overheated due to this mixture, then you will be looking at some costly repairs!