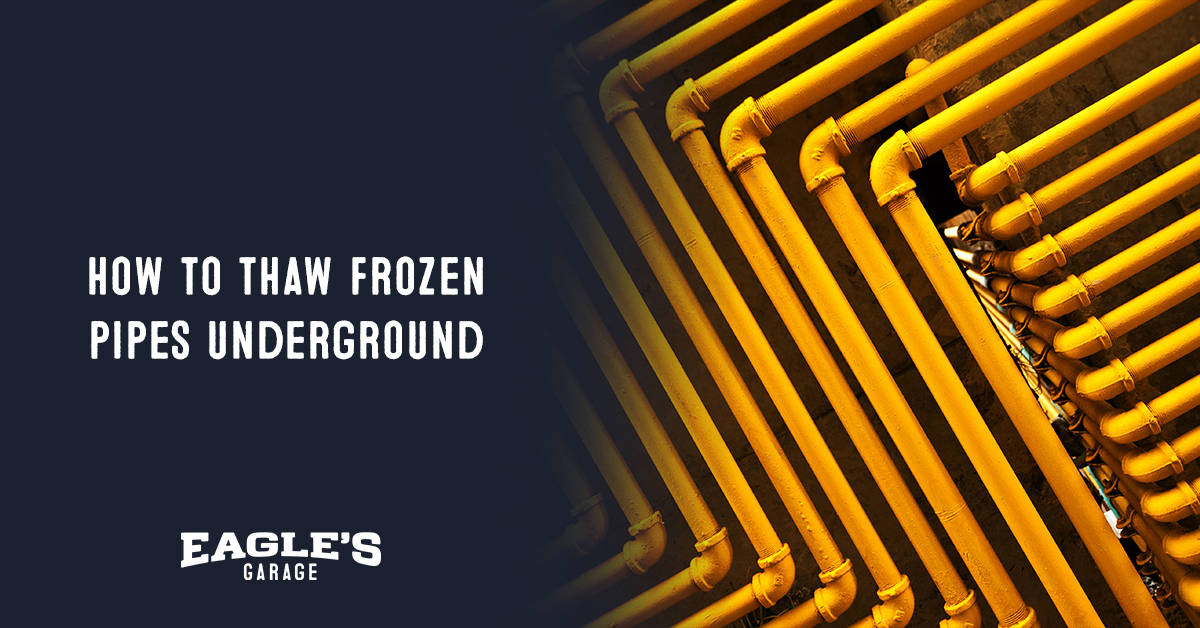 Anyone who lives in a colder climate knows the dangers of frozen pipes – although this can happen just about anywhere the temperature drops below freezing. Frozen pipes not only create a mess in your house, also thawing a frozen pipes underground is really expensive to fix.

Because your pipe are underground, you might think there’s nothing you can do to prevent this issue. The good news is, there is, if you have the right tools and know-how. If you don’t, calling in an expert is the way to go. Either way, here is how you can thaw your frozen underground pipes, and to prevent this from happening in the future.

How to Thaw Frozen Pipes Underground

Most experts say that underground pipes will not begin to freeze right away. Even though water freezes at 32 degrees, an underground pipe is afforded some protection through insulation and the ground itself. However, if it gets cold enough your pipes might freeze. When that happens to underground pipes it can be especially difficult, because you might need to dig out the pipe to fix the problem. However, if you are an experienced plumber then you might be able to handle this problem. Here’s how to handle this issue:

Grab Your Tools That You Need

Just like any job, there are a handful of tools you’re going to need to get this job done right:

Once you have gathered all the necessary tools, here is how you go about unfreezing the pipe.

Step 1: Find and Dig out Around a Section of the Pipe close to your Tap

First, we recommend getting close to where the pipe enters your house. It doesn’t matter if this is where the frozen section is; you will be thawing the entire pipe this way, basically.

Dig a large enough hole out under the pipe so that you can place the bucket underneath, with the sump pump inside the bucket. Aim the sump pump’s discharge hose so that it is pointing well away from the bucket, from the house or from you. No matter which way it’s pointing, everything in that direction is going to get wet!

Step 2: Cut the Section of the Pipe Over Your Bucket

If you are an amature DIY-er trying this out on your own, this is the point where you should stop and call a professional. Cutting and repairing a pipe is no easy task, and if done wrong can lead to thousands of dollars in damages!

Most likely, there will be an ice plug where you’ve cut – but if you don’t see one that just means it froze somewhere else along the way.

Step 3: Connect The End Hose To Tap and Start Running A Hot Water

It will start to thaw the ice in the pipe. As it thaws, begin feeding the hose down the pipe. Slowly but surely the ice inside the entire length of pipe will thaw until the pipe is cleared.

At this point, you might have a gush of water start to flow as the pipe is clear and you have a direct line to the supply. Turn the water off at the supply and let it drain.

Step 4: Remove The Hose and Repair the Pipes

Remove the hose (if you haven’t already) and repair the pipe. Turn the supply back on and check for leaks. If there are no leaks, cover the pipe back up.

In the future, try leaving the water running through the pipe to lessen the chances of it freezing again.

How to Thaw Frozen Pipes Underground Without Digging

While the above steps might seem pretty straight-forward, it does involve a lot of work – especially when it comes to digging. If you’ve ever tried digging into frozen ground then you already know what I’m talking about. Thankfully, this isn’t the only method available to you. You can actually attempt to thaw your underground pipes without having to dig anything at all. Here’s how to do it.

Just like before, you’re going to need some tools to do this job right. You’ll need:

Also Read: How To Keep Tools from Rusting in Garage?

First, you’re going to want to fill the storage bin with water. Unlike the previous method, the temperature of the water doesn’t matter here. Hot, cold – either is fine. Take the storage bin and bring it to the water meter.

Unhook the water meter from the supply pipe so that you have access to the pipe. Place the storage bin underneath the opening of the supply line.

Step 2: Attach The Gate Valve Directly to the Opening in the Supply Line

Once you remove the ice from the pipe and free it again there’s going to be a serious amount of water pressure flowing, so you need to make sure that the valve is on strong and secure so you can stop the flow as needed.

Step 3: Take one End of the Hose and put it into the Supply Line

After putting the end hose to the supply line, push the hose as far as it will go into the line. Use the pond pump to push water through the hose, into the supply line itself. As the water flows into the pipe it will being to thaw the ice inside. As it melts, push the hose farther in. Continue to do this until the last of the ice blockage finally thaws and clear out of the pipe.

At this point, the pipe will be free, and the water will start flowing again. Shut off the valve and put the water meter back on before you open the pipe again. Once the water meter is reconnected, the pipe should be free and clear and able to run again. This method on how to thaw frozen pipes underground can save so much of your time.

Now that your pipes are clear, it is important to take steps to ensure that your pipes don’t freeze again. While you can’t control the weather, there are real, practical things you can do to give your pipes the best possible shot at staying free and clear during even the harshest winter months.

First, find any exterior faucets. Not everyone has outside taps, but if you do, those taps give the cold air a direct line down into your pipes. Prevent this by covering these outside faucets, which will help reduce your pipes’ exposure to the cold air that can come in.

For the faucets inside, and another problem areas, turn them on slightly so that they trickle. This small trickle helps to keep the water flowing, which will help prevent freezing. This will increase your water bill, as it ups your usage, but the slight increase in your bill will be much less than the potential cost of damaged pipes and a flooded home.

If you have trouble areas where accessible pipes are close to the freezing temps, warm them up by using heat lamps or space heaters. Make sure you don’t put then near anything that might catch on fire, though!

If you can reach the pipes directly, wrapt them in an insulator, such as pipe sponge. You can even go so far as to wrap them in electrical heat tape to warm them directly. This will help keep out the worst of the cold.

You might be wondering about preventing freezing in your underground pipes? This is a bnit more difficult. These pipes can be wrapped as well, but it’s necessary to do some excavating first to reach them. This can be expensive, but if your pipes are prone to freezing it might be worth it in the long run.

As you can see, frozen pipes don’t have to mean you’re out of luck. With the right knowledge and professional help, your pipes can be thawed out and your life can return to normal. Take steps to prevent this from happening in the future, and you might never have to worry about frozen pipes ever again!