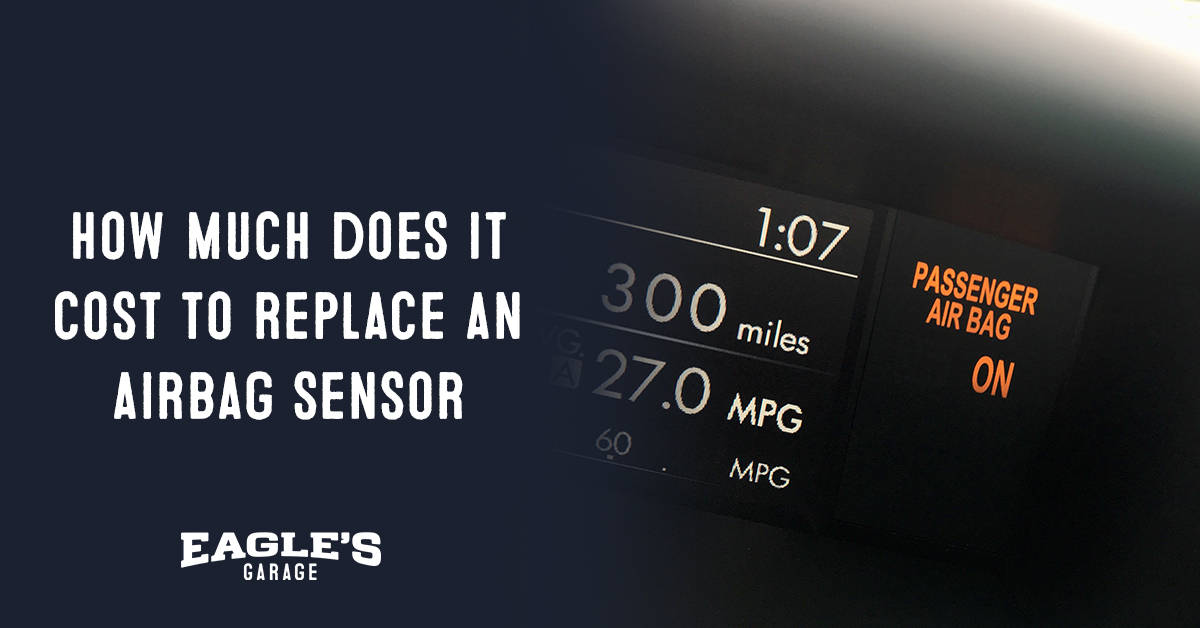 One of the most crucial safety components on your car is the airbag system. This system serves to protect the driver and front-seat passengers in the event of a collision. One part of this system is the Airbag Control Unit (ACU); This unit measures impact severity, determines if an airbag needs to be deployed, manages occupant recognition and more.

There are sensors that are part of the ACU that monitor what is happening in the car. The Airbag sensor is part of that group. That is why when you get in an accident you might see the Airbag Warning Lamp flashing on your dashboard. That means something is wrong with the sensor and it needs to be replaced at once!

You can expect to spend anywhere from $500 to $600 for a sensor replacement. This price might vary depending on your make and model of car, where you get it fixed and additional fees that may apply.

We’ll look into what the average cost is for replacing an airbag sensor and we will also look at some of the factors that might affect this price.

What is the car’s airbag crash sensor?

Modern vehicles have a number of sensors and computerized devices linked to the car’s electrical system. These play a major role in how your vehicle operates. The Crash Sensor measures changes in velocity; this is known as G-force. This sensor onboard detects if your vehicle had been involved in an accident and triggers the Airbag’s inflation.

When a car has an impact sufficient enough to deploy its airbags, an internal sensor detects this impact and triggers the ACU. The ACU subsequently determines whether or not the crash is severe enough for deploying the front-passenger’s airbag.

How Do Airbags Work?

Airbags work by rapidly inflating and filling up the space between a vehicle’s occupant and the interior of the car. Airbags are designed to supplement seat belts by increasing a driver or passenger’s chance of survival in an accident.

After detecting a crash, the crash sensor triggers an electronic control unit, known as the airbag module. This module controls all aspects of deploying an airbag including deployment speed, amount of inflation and duration. When sensors detect a crash at low speeds (less than 20 mph), the front-passenger side only is activated. In cases where there is more severe impact, both sides can be activated at once depending on specific make and model of car.

Inflation happens within just 0.05 seconds after activation; this gives drivers and passengers an added level of protection. Upon inflation, the first stage of the airbag is designed to go around the occupant’s head and chest while the second or third stages are designed to fill up around the lower part of the body.

Replacing your car’s Airbag sensors is very expensive, depending on the brand you have installed. Some brands may cost anywhere from $300 to $800 for just one sensor. This price does not include labor which could bring your total repair bill well over the $1,000 mark.

Other factors that can affect the price of your replacement are:

Here are some very simple signs to look out for that may indicate your airbag sensor needs to be replaced.

How often should I replace the airbag crash sensor?

In truth, it would be better not to have an airbag sensor malfunction at all. However, this is just not possible since they are meant to wear out over time. Factors that affect this are if you live in a particularly hot or cold region and structural damage could also be a factor. Corrosion from weather and age can cause the crash sensors to malfunction over time.

Typically, you should replace your sensor every 5 to 7 years. The specific replacement interval varies according to the type of airbag system in your car. Replace your airbag sensors as soon as you notice any issues; this will not only ensure proper performance, but also help prevent unnecessary expenses due to car damage or personal injury.

Despite the high price to have these replaced, airbag sensors are a crucial part of your vehicle. Their function is to monitor the occupants inside your car at all times so they can prepare for as much impact as possible. Airbags also provide protection from head-on collisions and side impacts where you’re likely to hit another object or roll over.

In total, you can expect to pay around $600 for the replacement of one airbag sensor, possibly more if it is not an OE (original equipment) part or there are other damages. The average life expectancy of a crash sensor is between 5 and 7 years; after this time frame, they may start having issues which could put your life at risk.

Replacing your airbags sensors will ensure proper performance and protection during collisions. Have the sensors replaced as soon as any malfunctions are detected. This will save you money in the long run by preventing car damage or personal injury that could result from faulty sensors.