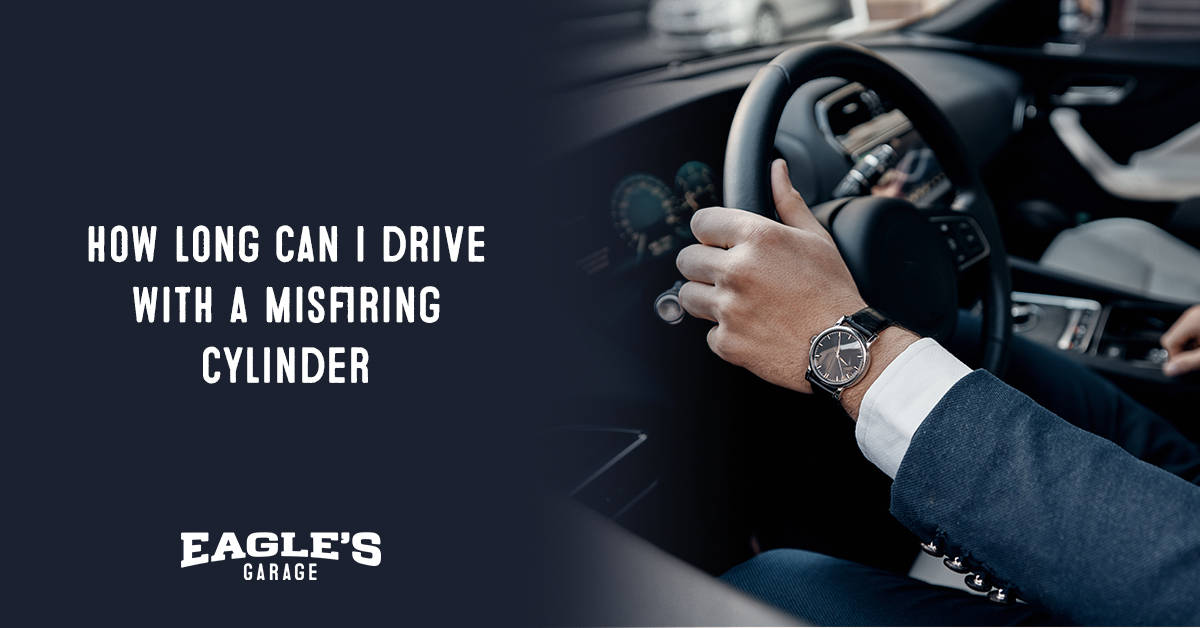 “How Long Can I Drive With a Misfiring Cylinder?” A misfiring cylinder is one cylinder in your engine that is not working as it should. This usually means that the cylinder in question is no longer firing at the proper time.

Because of this, all of the other cylinders are working harder to compensate.This can lead to a host of other issues. If you’ve noticed that your car is feeling sluggish but can’t pinpoint the problem, it could be a misfiring cylinder.

A misfiring cylinder is not something to simply keep ignoring. Reading this article may just save you time and a huge amount in repair costs.

We’re going to show you the signs to determine if you have a cylinder misfire problem.

A cylinder misfire is essentially the same thing as if a spark plug is out. The cylinder is firing but it’s not coming out as strong or there is not enough of it. So the whole engine is going to misfire or run poorly.

There could be several problems:

Fortunately, there are some things you can do to narrow down the problem and fix it:

3. The Air/Fuel Mixture Is Too Lean

When a cylinder is operating lean, the cylinder can still fire, but the flame will burn inefficiently. If the mixture is very lean, then it’s possible for the flame to not reach the entire combustion chamber.

This leaves unburned fuel. The unburned fuel will be pushed out with the exhaust gas. This of course, will lead to issues such as fuel economy, losing you money in the end.

4. Compression Drop in One or More of the Cylinders

Valves can become stuck, allowing the wrong amount of air and fuel to enter the cylinder. Normally the pistons move up and down inside the cylinder, which in turn makes the crankshaft rotate.

5. Issues With the Fuel System

Not only can a misfire cause your vehicle to run poorly, but it can also be a safety hazard.

There are several possible causes for misfires, starting with the fuel system:

Also Read: How to Reset Car Computer Without Disconnecting Battery

Six Tell-Tale Signs That Your Car’s Cylinder Has Misfired

When a cylinder misfires, your vehicle will not perform at peak efficiency. The engine may shake when you release the gas pedal, or accelerate slowly with a choppy motion.

Misfiring in one cylinder may not cause any noticeable problems at first. If you have multiple cylinders misfiring, you will begin to notice decreased acceleration and poor performance while idling. You may even notice a burning odor.

One of the most common sounds you may hear on a running engine is a rattling noise. This rattling noise is typically caused by loose or worn parts in the engine. It doesn’t always mean there is a serious issue.

However, you should still have it checked out by a mechanic. If it is a serious problem, you may need a complete engine overhaul, which is a costly repair.

Normally, the rattling noise is caused by loose or worn parts or by a build-up of carbon. This is usually found in the engine.

Fuel economy is an important indicator of how well a vehicle performs. It is directly related to the amount of fuel a car engine uses to go a certain distance. A misfiring cylinder will certainly cause fuel issues.

Fuel that doesn’t burn properly is just a waste of money. This is especially if you rely on your car for long-distance traveling for your work.

Also Read: How to Test a Fuel Pressure Sensor With a Multimeter

A stalling engine can be dangerous as it can cause damage in many ways. A car can stall when the fuel supply is insufficient or when the engine’s computer malfunctions. If the engine is stalling when you start it up, the problem might be a misfiring cylinder.

Have you ever experienced a car engine that vibrates abnormally when doing a constant speed over a period of time? When your vehicle vibrates, this is probably the result of a misfiring cylinder.

This is most commonly caused by a worn spark plug, or a loose or faulty spark plug wire. Sometimes it’s a faulty cylinder head. If you experience this, you should visit your vehicle’s service advisor. The advisor will inspect your vehicle and advise you on the next steps.

When starting the engine, the cylinder to fire first is the first one to the right of the driver. If this cylinder misfires, it will usually be indicated by a backfire.

A backfire is a sudden burning of the air/fuel mixture that occurs before the spark plug fires. Backfires can be a symptom of a misfiring cylinder, but not always.

For example, if the car’s engine is flooded (too much fuel in the cylinders), the excess fuel can backfire. This backfire can indicate a misfiring cylinder, but it isn’t necessarily causing the backfire.

This is why it is important to diagnose a misfire problem as soon as possible.

Is it Safe to Drive with a Misfiring Cylinder?

A misfiring cylinder is one of the most frustrating problems in a modern vehicle. It can make the car difficult to drive, and it can increase the chances of other, more serious problems occurring.

But is it safe to drive with a cylinder misfiring? The answer is a bit complicated, but generally, yes, it is safe to drive.

The engine will still run. A misfiring cylinder can potentially cause damage to other parts of the engine. It’s unlikely that the damage will be so severe that you’ll be stranded on the side of the road.

Still, you should get it checked out by a professional as soon as possible.

How Long Can I Drive with a Misfiring Cylinder?

If your car has a misfiring cylinder, how long can you drive it before it becomes dangerous? It depends on how bad the misfire is, what type it is, and how you choose to fix it.

In most cases, you can drive it long enough to get it back to a mechanic. But if you’re driving through remote areas, you may not want to risk it.

When a cylinder misfires, warning lights will engage on your dashboard. However, if you have a misfiring cylinder but no lit warning light, you may be able to take a drive anyway.

But remember, it’s in your best interest to get it checked out as soon as possible. A misfiring cylinder can cause a number of issues, from a leaking oil seal to an engine fire.

By now you should know the answer to the question: “How Long Can I Drive With a Misfiring Cylinder?” The answer is: Not longer than necessary.

A misfiring cylinder is nothing to ignore. What might seem a minor annoyance at first can turn into a real problem in time. As we’ve already mentioned, a bad cylinder causes way more problems than it’s worth. Seek out your local auto shop to get your misfiring cylinder repaired.

If you like what you are reading, please consider checking below posts: