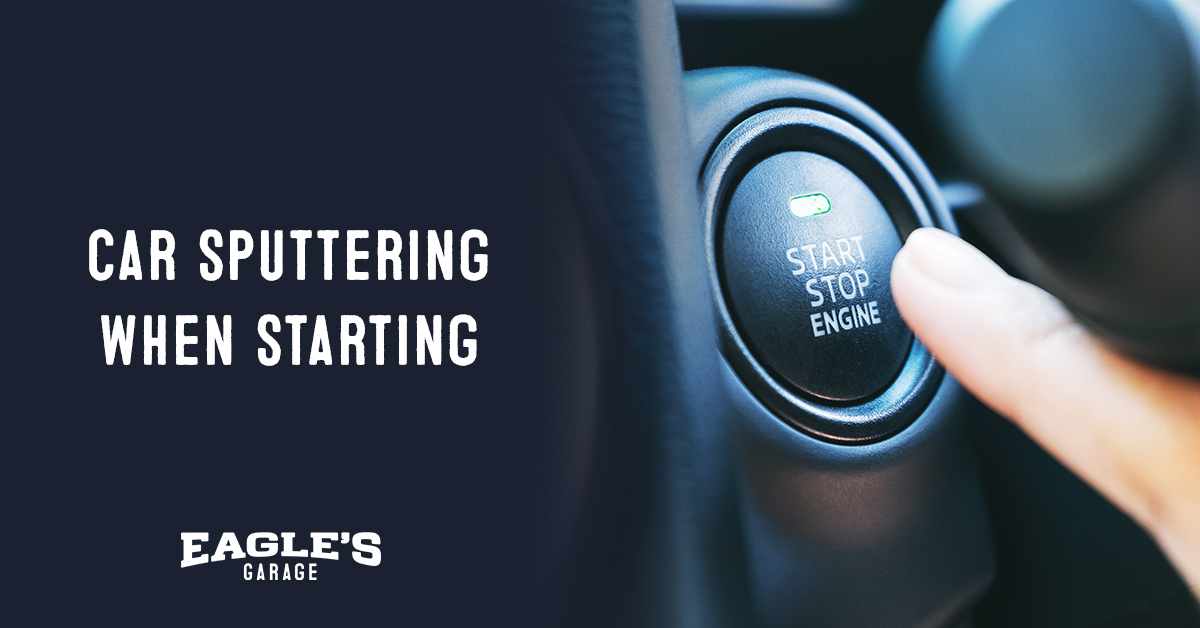 Car sputtering is defined by gasping, lurching and other unpleasant behavior when the engine is started.

Normally it is a natural phenomenon of a vehicle, caused by the difference between fuel and air ratio that may happen once in an off chance that usually means absolutely nothing as a result of the vehicle being started up after a long time but sometimes it does have an underlying cause which requires attention from the owner to deal with.

Normally it’s not easy to narrow down the reason for such an occurrence as the problem might be caused by a number of things and can also run in reverse (the car will start fine but then sputter later).

But fret not, this article will do its best to break down what can cause your car’s engine to sputter when starting so that you have a better chance of understanding and finding out what to do about it.

Causes of Car Sputtering When Starting

The following are potential causes of car sputtering when starting:

First on the list we have an obvious one: dirty fuel injectors. If your fuel injectors are not cleaned, carbon and other such things can build up overtime and cause an improper flow of gas to the cylinders which may mean that you’re not getting as much gas as you should be during starting which can lead to a lack of power or uneven running.

Clean your car’s fuel injectors right away if this is the problem and make sure to check them with a pressure gauge (if possible) before you start the vehicle again after cleaning them.

Another problem that arises with time is a vacuum leak. If you can just imagine your car engine as a giant air pump that takes in fuel and air then imagine the intake manifold as the place where this is all built up.

If there is a leak anywhere on any of these lines, it will have an adverse effect on the overall performance of the engine. A lot of times these are hard to spot without proper equipment or training but if you ever see your car start sputtering once after being started, especially when it’s not hot yet, chances are there is some sort of vacuum leak somewhere.

Even though spark plugs usually last a long time, they can still fail out of nowhere after years of service. If you’re having problems with your car not starting up properly or it starts up fine but then sputters later on even though all your filters are clean and your gas is fresh, this might be the problem so check to see if it’s the spark plugs since they are very cheap and easy to replace.

When an exhaust system leaks in any way, in most cases it would cause backpressure in the engine which in turn can lead to sputtering when starting or even running.

If your car is leaking anywhere on its exhaust system then you better get that fixed right away for the safety of yourself and others around you.

A dirty airflow sensor has the potential to cause sputtering when starting. This is especially true if your car is not getting enough air inside it for proper combustion which can lead to all sorts of problems including sputtering while starting up.

If you’re having this kind of problem then check your airflow sensor by cleaning it or replacing it if necessary.

A converter’s job is to help with emissions control which means that if there’s a crack or any other sort of damage in it, it can cause reduced emission levels along with problems regarding emission control. This may result in sputtering while starting up so check your converter right away.

A lot of the time they are not hard to spot, just look for the place where there is smoke coming out from near the tail pipe and you will most likely find that damaged part then all you have to do is replace it at home instead of taking it into an auto shop.

Rare but bound to happen eventually is a worn-out gasket. If your engine is overheating and sputtering due to this problem, you probably have a bad gasket or at least one that needs to be replaced so check for it.

If you’re not getting the proper cooling because of this then chances are there is some sort of high-temperature warning light on your dashboard already telling you just how serious this problem really is.

An oxygen sensor can go bad after a certain amount of time and if this happens, your car’s computer will keep trying to compensate for the lack of oxygen but it can’t find it since one of its sensors is no longer working properly.

One way that this shows itself is sputtering when starting up so if you have tried everything else then check these out.

A good battery is a must for proper engine performance. If there’s no juice coming from the battery then it can cause erratic operations on some of your electrical systems including those that are crucial to engine starting and running.

If you’re having this problem then check your battery right away because you might accidentally end up stranded somewhere if it goes completely down.

Last but certainly not least is the ignition switch which is mainly responsible for starting your car. If it fails or gets stuck for some reason, you’ve got yourself a problem on your hands because trying to start the engine with this kind of issue will only produce sputtering when trying to start up and it is a very bad idea to keep trying because you can easily damage your starter and cause a fire.

So if you’re having trouble with your car sputtering when it starts up, check the ignition switch first then replace or fix it.

How to Fix Engine Sputtering

Now that you understand the basics of why your car is sputtering, let’s take a look at potential fixes that may help you resolve this issue:

Oxygen sensors can go bad and build up carbon deposits. To clean your oxygen sensors, you can use a wire brush, engine degreaser and water.

Although not a common problem, ignition coil failure can lead to rough or low idle and intermittent sputtering when starting up. To check the ignition coil, you can obtain a multimeter and check the voltage drop across the terminals of the coil.

Check out the fuel injectors:

If sputtering starts occurring, it may be time to check and clean your fuel injectors. You can do this by running a solution of water and carburetor cleaner through all fuel injector lines, as well as the internal passages. After you do this, check the fuel pressure and replace any worn out parts.

Vacuum hoses can be easily damaged by rubbing against sharp objects. Inspect them by visually checking them for any tears or kinks. You can also listen for hissing sounds that indicate a leak. Replace worn out hoses to help avoid rough idling and sputtering.

If your engine is sputtering during initial startup, the problem may be due to a dirty air filter. The air filter should be changed every thirty thousand miles or so depending on driving conditions.

As you can see, the reasons for engine sputtering are varied and from what we’ve discussed, it’s safe to assume that you will still have an issue even if you fix one of the problems listed.

However, fixing this problem is easy enough and depending on how severe it is, your car may or may not start up smoothly.

When in doubt, consider taking your car to a professional mechanic who can diagnose and fix any issues with your car’s engine in a jiffy.