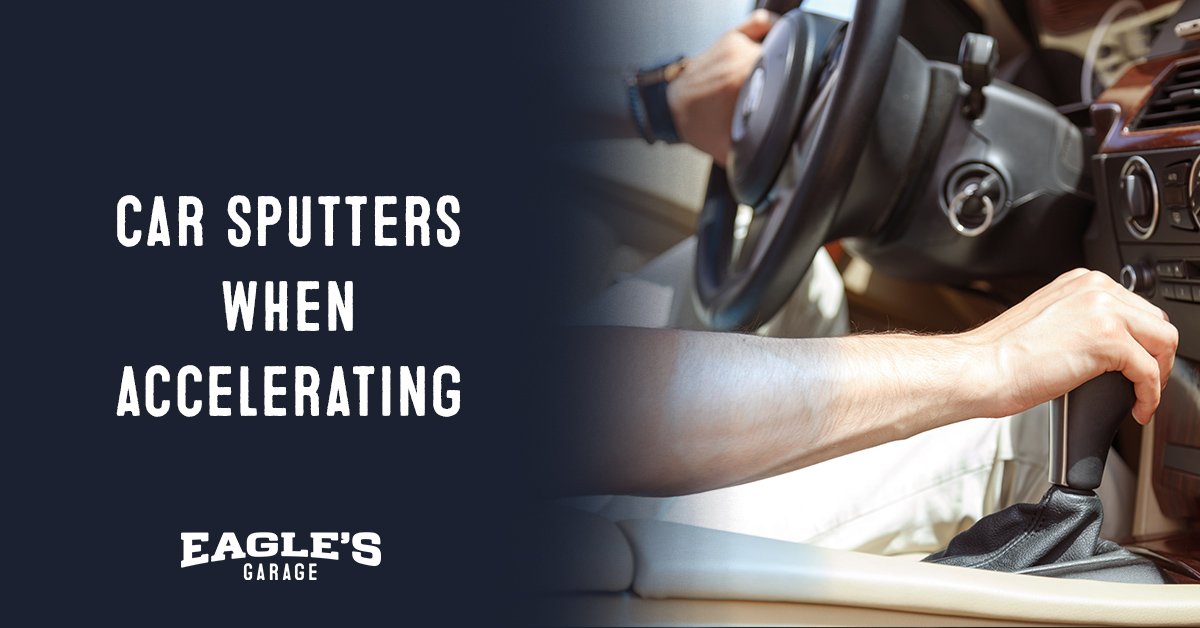 Driving a car is one the most enjoyable experiences for many folks and equally, the most irritating thing can be when that same vehicle will not function properly when attempting to perform a most simple and basic task such as accelerating.

One of those most annoying things that can happen with your vehicle is that it can suddenly sputter or jerk forward when you try to accelerate it a little. This is not only an annoying problem but also a potentially dangerous one as well especially if you are driving on a busy road or need to quickly get out of the way from incoming traffic.

Honestly, there are a multitude of reasons that can cause a car to sputter when accelerating and though the fix is usually easier and simple than most, diagnosing the actual problem can often take some digging around in your engine compartment.

Let’s examine a few of the most common reasons for this annoying problem to occur.

Reason #1: Something Wrong in the Fuel System

A major culprit for this problem is often the fuel system. There are multiple components to it other than just the fuel itself:

The fuel filter is a small, but a very important part of the fuel system. While clogged, it prevents oil and dirt from getting into the engine which can cause problems down the road. This component should be checked regularly to make sure that it is clean.

The third and final part of the fuel system is the actual fuel pump. This is what pumps the required amount of fuel to where it can be burnt in order for your engine to run as intended. When this component malfunctions, it will also cause the vehicle to sputter when accelerating since there is not enough fuel being pumped throughout the system.

Reason #2: Issues with the Spark Plugs and Wires

When a vehicle is manufactured, it comes out with brand new spark plugs and spark plug wires. The problem is that over time, these components start to wear down resulting in the vehicle not having enough electricity flowing through its system.

When this happens, your vehicle will sputter or jump forward when you try to accelerate simply because there is not enough electricity present which causes the engine to lock up.

Getting rid of this problem will require the location of the faulty wiring and replacing them accordingly along with spark plugs if deemed necessary.

The engine on a vehicle is a pretty complex one and often the biggest contributors to its proper functionality are the oxygen sensors. This part of a vehicle is what tells the computer onboard exactly how much fuel to inject while also keeping track of whether there is enough air going through it.

When these components fail, this causes your car to sputter when accelerating or even result in not starting up since there won’t be any indication that it has received a sufficient amount of air and fuel mixture required for combustion.

Reason #4: Leakage Around the Intake Manifold

When there is leakage around the intake manifold, then this can cause your car to sputter when accelerating. One of the biggest reasons why there are leaks here is because of worn-out gaskets.

Oftentimes, if you have a high mileage vehicle on hand, it’s quite likely that your engine will require new gaskets at some point since they are one of the first things to wear away due to constant pressure and heat applied against them.

Replacing these components will require you to take apart the entire intake manifold in order to replace them entirely along with cleaning up any carbon deposits that may be restricting airflow inside of it.

The mass air flow sensor is responsible for measuring the amount of air entering your engine so as to give an indication of how much fuel your vehicle has received.

When this component malfunctions, it will cause your car to sputter when you try to accelerate since there won’t be enough information being sent back to the computer about the required airflow in order for it to adjust accordingly for more power. Replacing this part accordingly along with cleaning up any carbon deposits that may be restricting airflow inside of it.

The catalytic converter is responsible for the expulsion of harmful gasses that may be inside of your engine. This component is also responsible for making sure these fumes are being pushed out at a safe level so that they don’t cause damage to other components in your vehicle.

When this part malfunctions, then you will experience sputtering or jerking when accelerating since this means there won’t be enough gas being pushed through it which results in an insufficient amount of fuel being injected into the engine. Installing another catalytic converter or cleaning up any carbon deposits that may be restricting airflow inside of it should get rid of this problem.

Cylinders and valves within an engine are one of the most important components to keep track of when talking about these types of problems.

When the cylinders and valves aren’t functioning properly, then this can cause your car to sputter or jerk while accelerating due to insufficient amounts of pressure and air being applied towards the combustion process. Replacing any damaged or worn-out cylinders and/or valves may do away with this problem entirely.

Reason #8: Moisture on the Distributor Cap

If there is moisture on the distributor cap then this can cause your vehicle to sputter while driving.

This is definitely a pretty common problem since it’s largely down to the fact that water gets past the injector seal since it doesn’t pass too much ongoing maintenance and testing on these components. Installing an entirely new distributor cap should help.

A carburetor is responsible for the flow and distribution of fuel in your engine and therefore a faulty one could cause sputtering while accelerating. These can be tricky to address but a quick fix will include the installation of a new carburetor altogether. New gaskets, seals and valves can also be installed to get rid of this problem.

This is usually easy enough if you’re dealing with a carburetor from an old vehicle but with today’s modern vehicles, the replacement of a carburetor may require a lot more work depending on how your car was manufactured.

Reason #10 A Problem with The Gas Lines

An incredibly common reason why a vehicle will have these problems is due to a blockage in the gas lines.

Getting your hands on a chassis pipe cleaner should do the trick in cleaning out any potential blockages within the gas line and therefore cause your car to stop sputtering while accelerating.

The best way to learn about how to avoid these problems in the future is to stay on top of your vehicle’s ongoing maintenance and testing procedures. Performing routine engine flushes, changing out filters, checking fuel pressure levels and replacing any worn out components should eliminate this issue entirely.

If you do notice that your car is starting to sputter while driving then you need to check for these common problems immediately in order to take care of the problem before it gets worse.