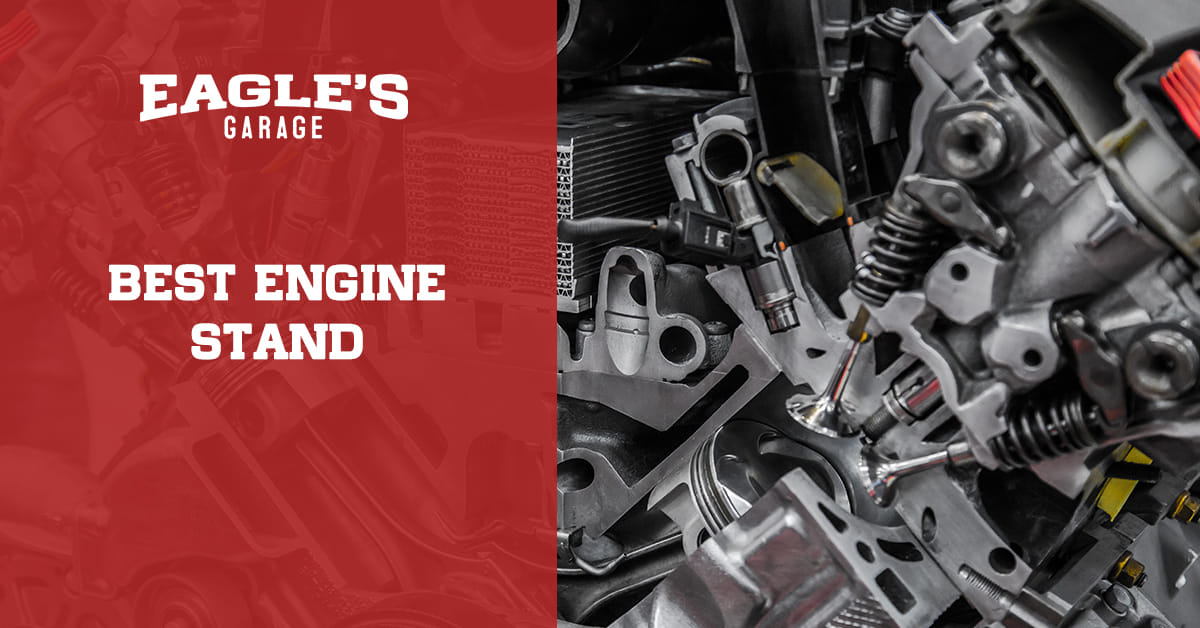 If you work on engines, you know how important it is to have a reliable engine stand. A good stand can mean the difference between a dropped engine block and a good repair job. Because engines can weigh up to 1000lbs or more, you need a sturdy engine stand to do the heavy lifting for you. In this article we review the top five engine stands and see which one is best.

The Duralast engine stand is a “T” base, non-foldable stand. It is the least expensive stand on our list, but the second heaviest:

Load Capacity
This engine stand can hold up to 750lbs. This is on the low end of our list, but will still be plenty for most cars’ engines.

Stability
With three wheels, the Duralast stand seems quite stable. The front wheel is a swivel caster which helps you get the best positioning for your engine work.

Material
The Duralast engine stand is made of heavy duty steel.

Dimensions
Weighing in at a whopping 44.05lbs, the Duralast stand is the second heaviest engine stand on our list. It has a depth of 35.43 inches.

This is one of two OEMTOOLS brand engine stands on our list. The 1000lb model has an “I” shaped base and is the second most affordable stand we’ve reviewed here:

Load Capacity
This engine stand can hold up to 1000lbs, or a half ton. Hitting right in the middle, this is still plenty of holding power for most projects.

Flexibility
The OEMTOOLS 1000lbs stand has four adjustable mounting arms and a locking head plate that can rotate up to 360 degrees.

Stability
Four wheels with two swivel casters at the front give this stand plenty of stability.

Material
This stand is made of tubular steel. 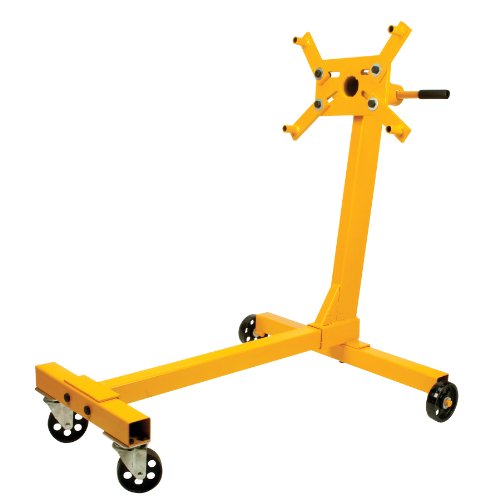 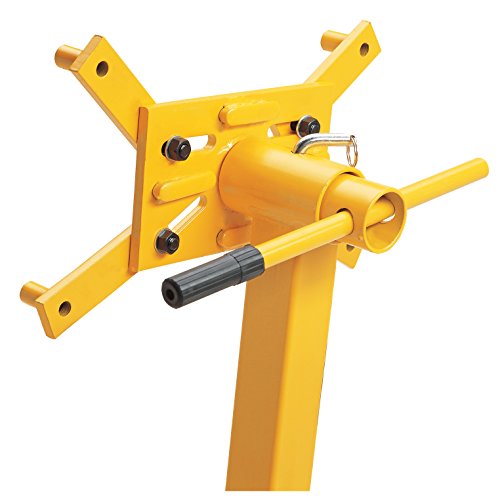 The Performance Tool engine stand is another  “I” base, non-foldable stand. It is a lighter stand with a slightly higher price tag:

Load Capacity
This engine stand can hold up to 1000lbs as well.

Flexibility
The Performance Tool stand also has four adjustable heads which can lock into six positions. The head rotates up to 360 degrees.

Stability
This stand has four wheels like the OEMTOOLS stand, but the wheels on the back look to be bigger. The two swivel caster wheels on the front provide good balance.

Dimensions
This is the second lightest stand at 30.4lbs. Its dimensions are 8.5 inches long by 7.75 inches wide by 35 inches tall.

Similar to the Duralast engine stand, the Hardware Machinery stand is a “T” base stand that is the lightest stand on our list:

Load Capacity
The Hardware Machinery stand can hold up to 750lbs.

Flexibility
This stand also features four adjustable arms. It also has a lock pin to lock your engine in place while you work.

Stability
This is a three wheel stand with a ball-bearing caster at the front and two wheels at the back.

Material
This engine stand is made of steel, though it is significantly lighter than the other stands on our list.

Dimensions
As the lightest stand we reviewed, the Hardware Machinery engine stand comes in at just 10.6lbs. It also comes with a tool tray.

This stand can hold up to 1250lbs. It has the highest load capacity on our list.

Flexibility
This OEMTOOLS stand features four adjustable mounting arms and up to 360 degree rotation. It also has an engine lock pin. It is easily disassemblable for storage.

Stability
This engine stand is the most stable-looking of the stands we’ve reviewed. It has four wheels including two ball-bearing caster wheels at the front. It has a brace in front of the mounting arm making the base a flat topped “A” shape. Unlike the other stands, this one’s rear wheels sit underneath it rather than off to the sides.

Material
The OEMTOOLS stand is made of heavy duty steel.

Dimensions
This is the heaviest stand on our list at 72.7lbs.

With a range of load capacities from 750lbs to 1250lbs, the stand you choose really depends on the size of the engine you will be working on. While the 1250lbs OEMTOOLS engine stand would be plenty of heft for most projects, the higher price tag might overshadow the extra weight capacity.

While it’s on the lower end of the weight capacity range, the Duralast stand looks extremely sturdy and has quite a bit of heft to back it up. For the price, it’s a great deal to get such a well-built stand for just over $100.

None of these stands offer wheel locking on the swivel casters, which is not a huge deal but would have been nice to have for safety purposes. Additionally, the steel used to construct the mounting heads is rather thin on the Performance Tool, Hardware Machinery and OEMTOOLS

1000lbs engine stands. With such heavy loads, it’s important to have an engine stand that’s not going to warp under pressure. Thin steel plates are a worrying thing to have on something that is meant to hold half a ton of weight.

The wheels and casters themselves could be more durable on all the models as well. They all appear to have similar plastic wheels which won’t have as good traction as something with a little rubber or otherwise tread to it.

When looking for the best engine stand, there are several factors to take into consideration. You need a stand that will hold up to heavy loads most importantly. It is also important to have durable materials that can withstand the weight and wear of moving the engine around while you work on it. There is also price to take into account, as you don’t want to pay extra for features you don’t actually need.

With all that in mind, the best engine stand in our opinion is the Duralast 750lbs engine stand. The mounting arm is strong and the adjustable parts aren’t flimsy like they are on some of the other stands. The balance of the three wheel design takes best advantage of weight distribution to hold up to heavy loads.

While 750lbs isn’t the most weight capacity available of the engine stands we reviewed, it is plenty for most vehicle projects. Unless you are working on a large truck engine, the engine should be under around 800lbs.

It is for these reasons above that we chose the Duralast 750lbs engine stand as the top engine stand in the $100 to $200 and 750lbs to 1250lbs range. Check out more about this great stand at AutoZone here.

To find more reviews on the best tools, check out our other articles. 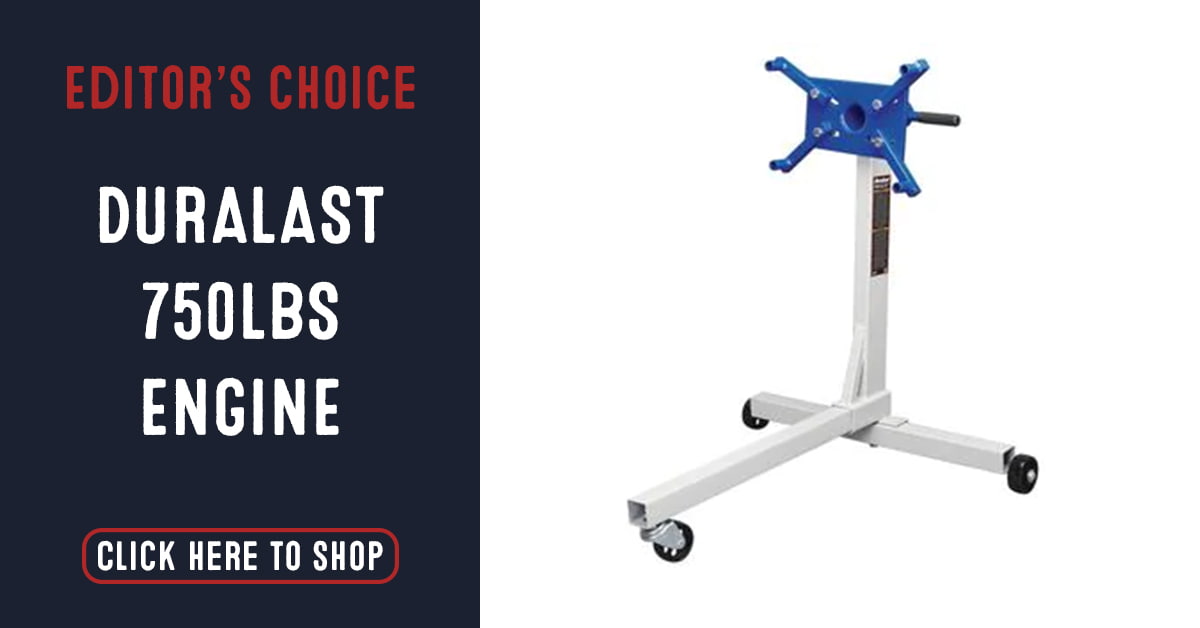