When you think of hammers, you most likely picture that very common tool that people use to drive nails. But did you know that there are actually many different types of hammers out there? It’s true, and each one is designed to perform a specific task.

Hammers are an incredibly important tool, and it’s safe to say that just about every household owns at least one hammer. Whether you’re hanging pictures, fixing a chair leg, or building something new, you need a hammer in your toolbox. But for other jobs, it’s necessary to learn more about hammers and what types are out there.

If you would like to know more, or if you need a specific style of  hammer, then you need to educate yourself on the different types of hammers that are available. Read on to learn more about hammers, including:

The Different Types of Hammers and Their Uses

When you think of a “hammer” this is the model you’re most likely thinking about. It has a flat head on one side to hit and drive nails, and a claw on the other side to remove them. 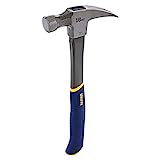 A club hammer looks like a smaller sledge hammer. It has large, flat heads on either side and is used for light demolition or driving things like masonry nails into concrete. 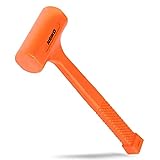 Thisi hammer resembles a club hammer in its shape, but is designed for softer hitting. It is used to dislodge parts, tap things into place, fixing small dents, or other applications where a lighter touch is needed. 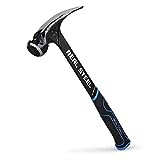 The framing hammer looks very similar to a claw hammer, but the flat head is waffled to prevent the hammer from slipping on the nail. This actually deforms the hit surface slightly, but since framing hammers are made specifically for putting house frames together, which are hidden, it’s okay, as no one will see it. 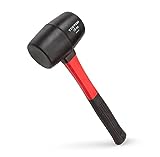 Another type of hammer that looks like a small sledge hammer, the rubber heads mean this mallet is used mainly for lighter applications where you need a more gentle touch, or where it’s better to hit your target with a bigger surface (such as when driving tent pegs into the ground). 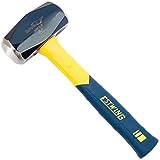 Sledge hammers are long-handled tools with huge, flat metal heads on both sides of the top. It is designed to deliver heavy blows and serious destruction, making it perfect for demolition. 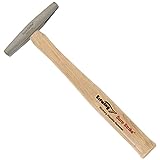 Also known as an upholstery hammer, this hammer has two long, flat heads. One is usually magnetized. This magnetized head helps to put a tack in place with assembling upholstery. The non-magnetized end is then used to drive the tack home. 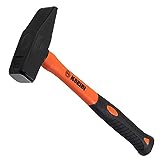 An engineering tool, ball pein hammers look like a normal hammer on one end, but instead of a claw on the other they have a rounded, metal ball. The metal ball is used primarily for shaping metal

A blacksmith’s hammer also resembles a regular hammer on the striking end, but the other end tapers into a long, narrow point. This helps to shape metal against an anvil.

Another blacksmith’s tool, this has two flat ends for striking; one square-shaped, and one cylindrical. Again, these are used primarily for shaping metal against an anvil.

Like the name implies, brass hammers are made out of brass. They have two flat, cylindrical heads used to pound steel pins. Useful for automotive work and woodworking.

Perfect for masonry work, one end is narrow and thin, which can act like a scoring chisel. The other end is flat but smaller, which helps to split bricks in two. 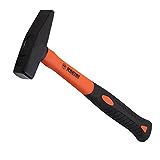 The claw end on a cross peen hammer is a large and wedge-shaped. It can be used for shaping metal or starting pins. Cross peens have a horizontally-aligned wedge, and straight peens have a vertcial alignment. 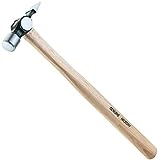 Cross peen pin hammers are similar to cross peen hammers, but they are smaller. These lighter versions are used for light woodworking such as cabinet-making and joinery.

Chasing hammers have an unusual handle – bulbous-shaped and larger and the end. The flat striking end and the small, round pein are usually used for shaping and making jewelry.

The peen of a drywall hammer is more like a blade, which is used to carve off and shape pieces of drywall. The blade also has a notch in it, which is useful for holding drywall nails in place. 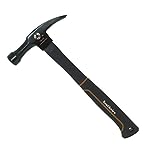 The electrician’s hammer resembles a claw hammer in almost every respect, but it has an extra long neck, which is useful for getting to those hard-to-reach nails in tucked-away places.

An engineer’s hammer is a smaller version of a sledge hammer, with two rounder, flat heads for hitting, shaping and rounding.

Like the name implies, hatchet hammers are basically a mix between two very useful tools; on one end, you have a hammer. On the peen side, however, there is a hatchet blade for cutting.

Picture a rubber mallet, but this time made out of wood. The sides of the wooden mallet head are slightly tapered. This sort of mallet is used to help gently join wood joints without causing damage. 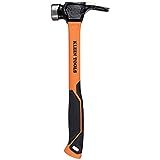 This hammer is designed for work on telephone poles, with specially-designed screws and bolts. It has a solid head and a cone-shaped peen.

Used primarily to remove dents in a car, this hammer features a long peen with a cone-shaped point.

Nail guns might not really be hammers, but they do the same thing: drive nails. In this case, nail guns use pneumatic pressure to move a lot of nails very quickly into wood or other materials. They are used mainly in construction.

Pitons are spikes driven into the sides of mountains to aid climbers. Piton hammers assist in this task. They have a flat head and a straight, tipped peen.  In addition, the peen has a hole in it to help remove pitons from the rock surface. 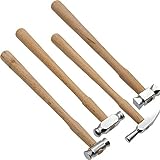 Another blacksmithing tool, planishing hammers help artisans shape metal over a planishing stake. They have a peen with a cylindrical point, and a convex head for smoothing and shaping.

Another pneumatic tool, power hammers drive a large piston up and down, like a hydraulic press. The difference is the piston moves hundreds of times per minute onto whatever material you put underneath it.

A rip hammer is basically a claw hammer with a straight claw instead of curved. As the name suggests, it’s used mainly for ripping material apart. 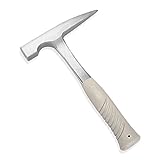 Rock hammers have a hammer on one end and a pick-shaped peen on the other. They are used to break and shape rocks, remove dirt and plants, and dig small holes. 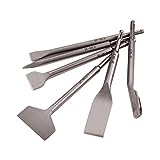 Although it’s called a hammer, scaling hammers don’t actually hammer things together. Instead, their chisel- and pick-shaped ends are used for scraping, removing rust and other debris from the sides of boilers or other containers. 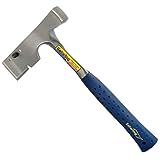 Used in roofing, shingle hammers have a special claw to aid in the removal of old roofing nails. 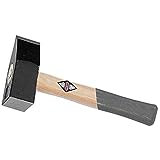 This sledge hammer features an oval-shaped head on one end, and a flat-edged peen for chiseling on the other. As the name suggests, these hammers are used in stoneworking.

Toolmaker’s hammers are unusual in that they contain a magnifying glass built into the head. This glass is used to zoom in on details as the artisan makes his or her tools. 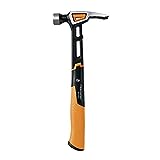 Trim hammers are basically smaller rip hammers, with a straight claw. These hammers have a smooth head for hammering trim nails without causing any damage. 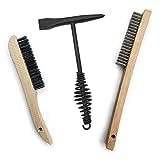 Welding hammers have a strange, spiral-designed handle for dissipating heat so the welder can use them to remove slag from welding points. These hammers have a round chisel on one end, and a vertical, flat-edged peen on the other.

How to Choose the Right Hammer for You

Now that you’ve seen some of the types of hammers out there, how do you know which one to choose?

As any craftsperson will tell you, having the right tool for the job is essential. With so many types of hammers to choose from, knowing what you need is important for ensuring your job goes smoothly.

By keeping factors in mind like your needs and materials, you can make sure you’re getting the right type of hammer for your job.